”Becoming a parent has defined me; I am the happiest i have ever been.”

I watched a really interesting TED talk the other day which was about encouraging honesty in parenting and dispelling some of the most popular myths – one of which was that people often wax lyrical about how happy they are since they became parents.

They looked at four (yes four!) independent studies tracking individuals happiness over the course of their marriage and you can see the findings below. The green line is the average result. 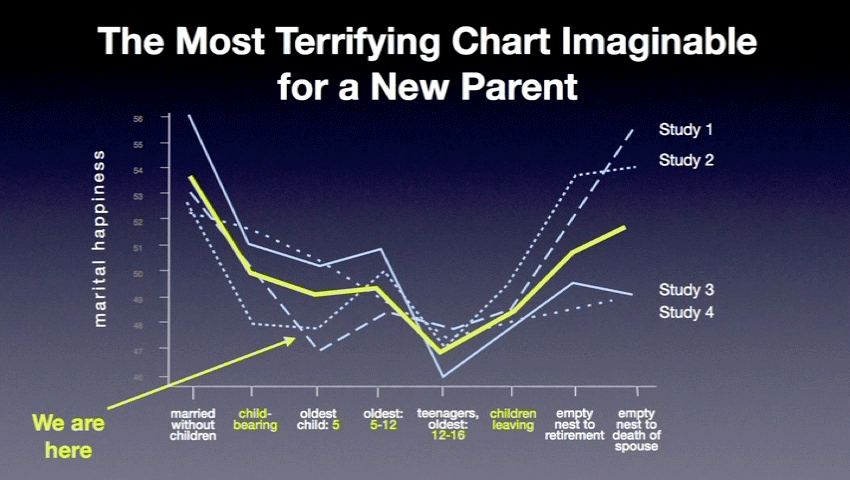 There is a huge drop in reported happiness from becoming pregnant which only recovers when your nest, um….empties.

So all this stuff we are hearing, or reading, or saying, is it just rubbish? Well you can hardly argue with the data can you, and to be fair it’s not exactly surprising.

In the ‘before time’ I was so busy having impromptu nights out, reading trashy magazines on the sofa and going to the toilet on my own that I hardly had the time to feel unhappy. And now? Well It’s not acceptable or advisable to bring young children out for cocktails, I stopped buying magazines after it became clear they would get eaten before i had a chance to read them and toilet trips, I’m afraid involve too much personal probing to be enjoyed.

Becoming a parent means a large proportion of your time is dedicated to the pursuit of making sure your children are happy which naturally means your own happiness is being sacrificed somewhere along the way. And if their happiness depends on, for example, you pretending to be a friendly tiger that provides infinite rides on your back whilst they kick you in the ribs, then what hope have you really got?

But don’t worry there is good news. ‘How is this good new?!?’ Well the good news is that if you are feeling like a miserable bastard right now – its OK because so is everybody else. There is no need to feel bad, because It’s normal and normal is good.

And the other good news is that……oh hang on a minute, when they are teenagers you are well and truly screwed. So, sorry, no more good news for another decade and a half.

But there is a little anomaly here that the stats don’t quite give a voice to. It’s the get out of jail free card, the one that your offspring often play with precision timing, just as you are about to put your head in the oven.

For example I might be wearing my scuzziest coco-pops and red wine stained dressing gown and it might be mistaken, somehow, for a glamorous ball-dress. I might then receive a comment along the lines of ‘Oh Mummy you look like a beautiful princess today’ which might make me spit my coffee out all over the breakfast table.  And this little exchange may turn an already bad day good, more than making up for the pre-dawn threats of decapitation by plastic screwdriver.

I guess I am quite happy to spend 80% of my time, a little less happy than I was before if the other 20%* of it is spent laughing, like I never did before.

This post is linked up to the #badmumsclub linky. This time it’s hosted by the fabulous Morgana at But Why Mummy Why but make sure you check out the posts from fellow members Aimee at Pass The Gin  and Alison at Not Another Mummy Blog – both equally as wicked ;)

36 thoughts on “The happiness thieves”