To the guy who recently wrote ‘I’m Blocking Your Baby’s Facebook Photos’,

Firstly don’t worry; I’m sure none of your friends with children would have a grievance with your decision to block them. If it were me on the receiving end I would only be disappointed to have approved your friend request in the first place – because I thought you might be interested and proud to see the smiling faces of my kids? I count them as a pretty big achievement you know, I thought you might get that too.

I guess it must have been pretty liberating editing people from your life. Fair play, your choice. One thing that confuses me however is your need to do it so publicly. Is it not as much fun if you don’t tell everybody else? Are you trying to guilt trip us all into following suit? Is it all just a big screw you to facebook and instagram, do you think they would actually care?

I wonder if you would prefer we all post miserable photos instead, perhaps then we could all feel downbeat together? I am all for honest parenting and sharing the bad as well as the good but unfortunately there are no prizes for having the most difficult kid. I wish my children would do what I say but I’m afraid I am all too frequently the guy you describe in your article…

‘’Recently we were leaving the zoo at the same time as a dad who was carrying his screaming toddler to the car. He was calm, walking at a normal pace, while she was worked up to hurricane force. I wanted to go all Secret Service on this guy: set a perimeter around him, quietly and efficiently move people out of his way so they could get to their car and head home. Keeping your cool takes tremendous effort. Knowing what it takes, and that I don’t always have it, keeps me ready to stand up with people who are showing (and in need of) mercy’’

OR maybe he appeared calm because he actually was. Maybe he was just thinking about what type of car he would buy if he won the lottery and maybe she had just remembered she left her hair straighters on. That guy was not some sort of martyr, he was just a parent getting on with it like everyone else, you don’t get a medal for taking care of you own kids and you don’t need bizarre makeshift perimeters constructed around you either.

All the stuff you describe – crying babies, lack of sleep, petulant toddlers is just normal stuff that everyone goes through.  I’ve found reaching a level of acceptance works best for me. Well acceptance and gin, together they make me a mostly happy parent. Comparing and and competing doesn’t.

You know maybe we could just accept that social media is and always will be an edited version of life. Maybe one of your friends, that you ended up blocking, got one good shot after a hard day and preferred to keep that image in her head. Maybe the likes and comments gave her the boost she needed to do it all again tomorrow.

So just for you here is a picture of my youngest eating angel delight for the first time. Does it make you resent me? See I’ll be betting there are a whole bunch of people out there than don’t even know me, and that can enjoy a cute picture of my kid and raise a smile none the less.

It’s called feeling happy for people – maybe you should try it. 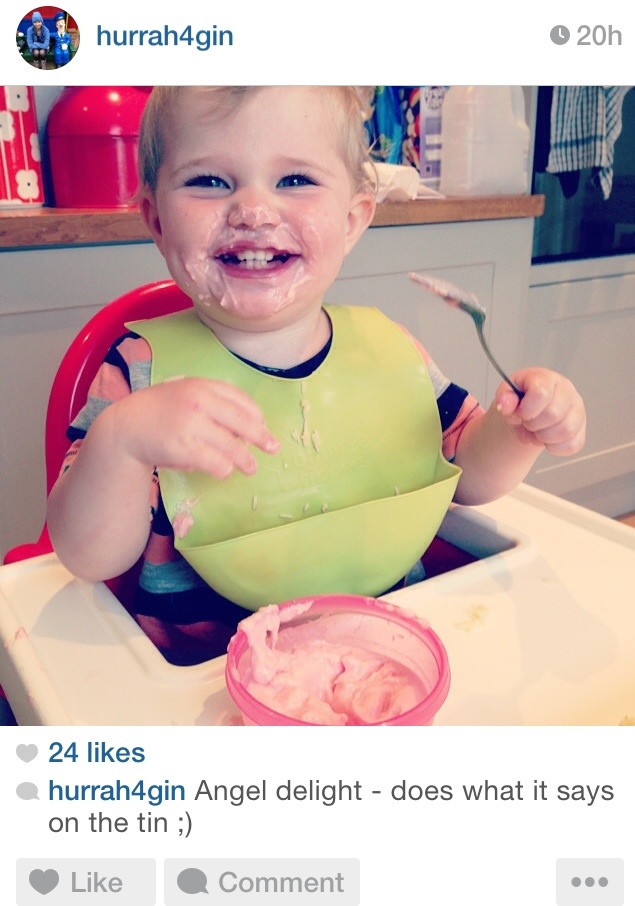