I have tried to contact you via the Royal Mail but they are under the illusion that Greendale is a fictional place – what’s up with that?! You may find this letter a tad harsh but I feel I need to write to address you directly as your friends, family and colleagues seem unwilling or unable to give you any constructive feedback.

Lets cut to the chase. You are crap at your job and I have absolutely no idea how you managed to blag your promotion to Head of Special Delivery Services. You consistently lose, damage and/or open parcels you have been entrusted to deliver which is both stupid and illegal. Before you protest I have listed a few examples of your incompetence that have particularly riled me.

1. You severely delay the start of Amy’s Animal Day after you open your van to check that the fruit bats you are delivering are ok. Quelle suprise they fly away and you dick about for god knows how long trying to tempt them back into the van with apples. Poor Amy was beside herself, it was the highlight of her year!

2. You failed to secure the doors of your van and lost Michael’s film for his open air movie night. You thought that showing a movie of yourself entitled ‘Postman Pat – Movie Star’ made by some kids was a suitable alternative. It was actually extremely arrogant AND you didn’t even say sorry.

3. Lizzie was incredibly nervous about her music recital and was depending on you to deliver her Piano on time so she could practice. You were very late and she fudged it up but yet again you are hailed hero of the day.

4. You deliver a single pair of ice-skates to that spoilt bitch Meera by er, HELICOPTER (!!!) How can this possibly be cost effective? Was this actually sanctioned by the Royal Mail? 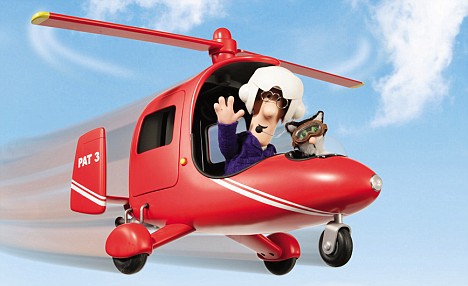 5. On the day of the re-opening of Pencaster Town Hall you are tasked with making two (!) deliveries at the same time, before the episode even pans out we all know this is way beyond your scope. After successfully delivering some oil to Ted (well done) you are desperate to show him the balloons for the celebration in the back of your van… oh dear, they float out. PC Selby then becomes entangled in them and drifts off into the sky, you seem pleased as rescuing him is an excuse to use the helicopter again! It’s just another ridiculous sequence of events that could only happen to you and somehow you come out of this better than if you had just made the straightforward delivery?!?!?!??!!?

These are just a few examples, there are many more believe me. I am left flabbergasted at the end of each episode when, instead of issuing demands for compensation, everyone cheers you on whilst you arrogantly smirk ‘Special Delivery – Mission Accomplished!’ Yeh, BY THE SKIN OF YOUR FRICKING TEETH!

What really takes the biscuit is that rather that giving you a disciplinary or performance review Ben decides to throw you a special party and presents you with the prestigious award of a Special Delivery Services Gold Star. He says, and I quote ‘Pat’s the best of the best, he’s never been late with a delivery!’

Are they seeing what I’m seeing?!?!? What kind of hold do you have over these people?!

Ok ok I watch a little too much of your new SDS show but my son likes it so what can I do? That’s what worries me the most – you are a role model to pre-schoolers whose biggest dream is to become an incompetent postman with access to a quad bike and snowmobile – it’s nothing short of delusional.

In light of the above I’d like to suggest you offer in your resignation. Mrs Goggins I’m sure would be a suitable replacement.

p.s It’s people like you who drive me to gin.

p.p.s Your live show was rubbish as well.

85 thoughts on “An open letter to Postman Pat”