In the before time I used to work in digital marketing, planning and implementing advertising campaigns. One of the key parts of my job was securing the best deal on behalf of my clients budget so you may assume me to be well versed in the art of negotiation.

It is true that since the communication levels of the eldest became more developed i have relied heavily on my trusty aforementioned friend (AKA bribery) as means of ‘getting stuff done’.

You know, eat your dinner and you get your pudding, brush your teeth and you get an extra story, stop being such a little sh*t or mummy will run off and leave you – that kind of stuff.

It works, sometimes, but it relies on the principle of a meeting of common goals or reaching a win-win situation. I don’t think he quite gets that bit yet.

He does however get the whole concept of deals and what is in them for him, but when he tries to broker them himself he negates to include any give on his side. i.e: –

‘If the baby eats all his peas can i have ice-cream for pudding – is that a deal?’

‘If i get to take Lightning McQueen to bed then you can you kiss him goodnight – is that a deal?’

These so-called trades are delivered in a singey songey voice, with a cock of the head, eager eyes and a full force pronunciation of ‘IZ that a DEEE-AL?’

I’m not sure what has happened to the steel like determination and cut throat nature I used to posses as one of those career people.  I’m confused! It seems there is a strong correlation between the ridiculousness of the deal and the likelihood of it being agreed to  :-/ 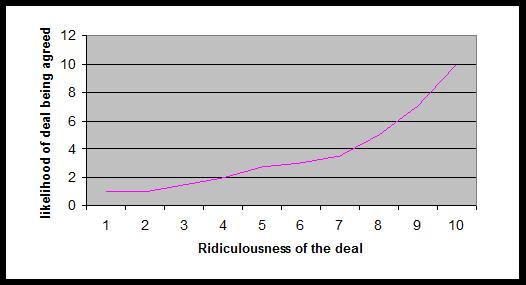 ‘If you moo like a duck then can we run around the garden in circles before bed – IZ that a DEEE-AL?’

It turns out I am only human.

And it turns out he is fully on the ball, despite the impression he gives off. For random humour is always key to getting what you want. At least with me.

I doubt that bits in the parenting 101.

Oh and for what it’s worth I also suspect there is a strong correlation between the likelihood of agreeing to batsh*t crazy requests and the respect one commands as a parent.

I guess I should adapt my approach. But then again, wheres the fun in that?