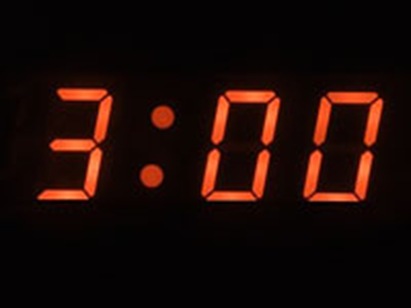 3am is the loneliest time.

Too late to pretend you could be still up watching TV, too soon for even the earliest risers to be getting ready for work. The late night cabs dropping people home from their nights out have stopped and the distant din from milk floats or post vans is yet to break the silence.

At 3am it feels like you are the only one awake.

When my older son was about 3 months old and starting to occasionally sleep through the night I was hit in the face with a brick. The brick would strike in the middle of the night shocking me awake and into a blind panic.

It seems my body was used to waking up for night feeds and my brain, full of the anxieties of a first time mum, would not let me fall back to sleep.

I would curse myself – I was so, so tired but I would lie there for hours unable to relax and let my body do what it had done, so easily, for years before.

At its worst i would only get 1-2 hours sleep a night. It was always the case that I would feel ready to drop off just as the birds would start to tweet signalling morning time. That’s the thing with insomnia – she’s a total bitch.

I’d look at my son and wonder how I would get through the day, how could i play with him and interact with him? He was so young and totally oblivious to it all but it left me feeling like a really shitty mum.

Frantically i turned to the doctors who armed me with sleeping pills and anti depressants but i hated the thought of using medication as a quick fix. I needed to deal with the problem at the route cause.

Well i did in the end i guess. I just found that after a while my anxiety lessened – sleep became less of an issue and as such i found it easier to sleep. Perhaps i just needed a while to find my feet as a mum.

However, once insomnia has had you in her grasp i don’t think you can every truly escape. She is always there on the horizon taunting you and whispering threats. She still gives me the occasional bad night now but the difference is that i just give her the finger.

At 3am i can roll over happy in the knowledge that i have 3 (maybe 4!) hours of lovely, cosy, peaceful sleep before my son comes in and jumps on my head.

11 thoughts on “3am is the loneliest time – Insomnia”