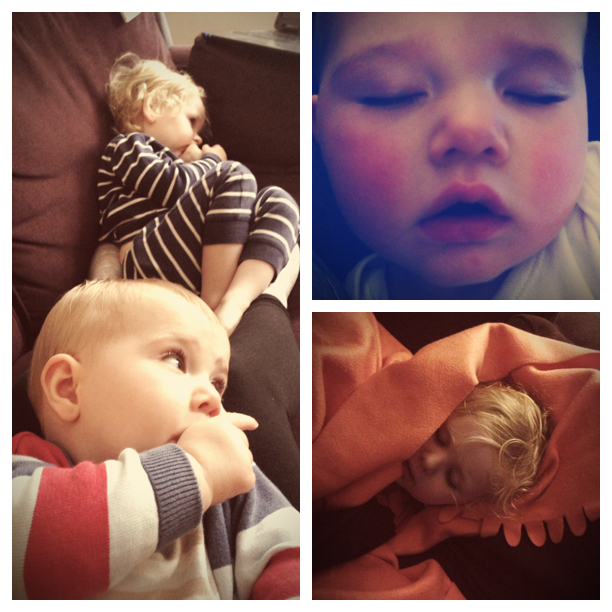 I’m not sure what’s worse – being ill with a crappy bug or being the only one well enough to clean up all the sick?

The last 24 hours in our household have been somewhat vomit ridden.

One minute we were having a lovely time kissing dinosaurs the next we were regurgitating lunch. There were tides of tears – it was not fun.

Today has been a tough day. J has been off work as he has also been ill so i have been doing my bestest impression of Florence Nightingale. F, although lethargic has been feeling better though baby S seems to have gotten worse.

It’s the first time in his 8 months on the planet he has been properly ill. He’s had a couple of colds, sure, but not a virus. Not something that knocks you for six and leaves you only able to lie, helpless, in your mama’s arms. He’s not even been crying for that takes too much energy. He Just lets out the occasional squeak or moan.

But there is something rather magical about taking care of littlies when they are ill. Both my boys are like wind up toys but when they are poorly, properly poorly, they are almost rendered back to their newborn self’s. Totally helpless, delicate, sleepy and soft.

They don’t want to escape my cuddles. They just look up at me with their big sad eyes as if to ask me why i am allowing them to feel this way.

It breaks my heart but also makes my heart swell with love for them.

They are both asleep now, hopefully having a good proper rest – ready for tomorrow and recommencing their usual task of winding me up as much as possible. Bring it on!

*Apologies for the amount of mentions of ‘vomit’ in this post – i hope it does not make you  vomit.