I see this sort of stuff every so often on social media – technology is evil, we all look at our phones too much, our kids are getting ignored and will probably grow up to be… well the direct consequence isn’t usually mentioned but I assume it’s something horrific… etc etc.

My first reaction when I read these types of posts is…

Basically I DO THAT AND THEREFORE I AM AN AWFUL PARENT!

I then make a promise to myself to stop looking at my phone so much and feel a bit better. Except I don’t feel that much better because when I have time to think about it properly, I actually get a little bit cross.

You see despite the message being a good one (yes we could all probably cut back a bit) the overriding argument, that technology is to blame for everything that is wrong in modern day parenting just doesn’t wash. My problem here is three-fold: –

1, It’s not just my phones fault. I Ignore my children all the time in many different ways.

When I’m cooking dinner, chatting to another mum on a play-date and even when I’m just daydreaming about getting smashed on Pina Coladas at the swim up bar on pre-kid holidays to the Carribbean with my friend Jane.

Ignoring your kids is not technology specific. In fact sometimes I wonder if all the bad rap it gets means that parents actually engage with their kids far more than was common in previous generations. I’m pretty sure I used to get ignored frequently as a child, as did we all, because banging on about the ways parents were letting their children down just wasn’t really ‘a thing’.

To be fair to my dad he never actually told me to f*ck off but I’m pretty sure the sentiment was there. I remember crawling around on pub floors making towers out of beermats and do you know what? I bloody loved it (and still do).

2, Ignoring your kids is actually a bit good for them.

Honestly who sits about watching their kids play happily in order to shout encouragements at them? If my kids are happy then I’m damn sure doing something else. I tell them how great they are and how much I love them frequently but they do not need to hear it 24/7.

Do you ever watch the X-Factor auditions and wonder how the hell some of the contestants on it think they can actually sing? You see their families in the wings building them up and cheering them on whilst they make of fool of themselves on national television.

This is those people… 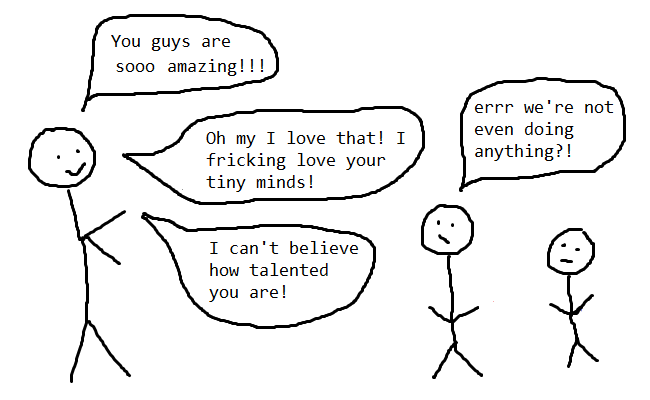 Normal people get ignored in life all the time and there ain’t nothing wrong with being normal, normal suits most people just fine.

Continuously bigging your kid up puts them at an increased risk of becoming a massive twat.

3, Why are parents always trying to guilt trip each other?

Yay go me I’ve just added ‘looking at my phone too much’ as ANOTHER thing on my list of all the bad stuff I do. Including shouting too much, feeding them chicken nuggets twice in one day and locking myself in the bathroom to eat a secret Twix because their whining is making my head want to explode.

Looking after kids at home on your own, especially if you are stuck indoors on a rainy day, can be boring. In fact scratch that, it can be really f*cking tedious.

No one would say it’s ok to pass them a pack of Pringles and whack the tellie on for 12 hours straight but taking 10 minutes to look at Facebook because you are about to go out of your fricking mind is probably more healthy than not. 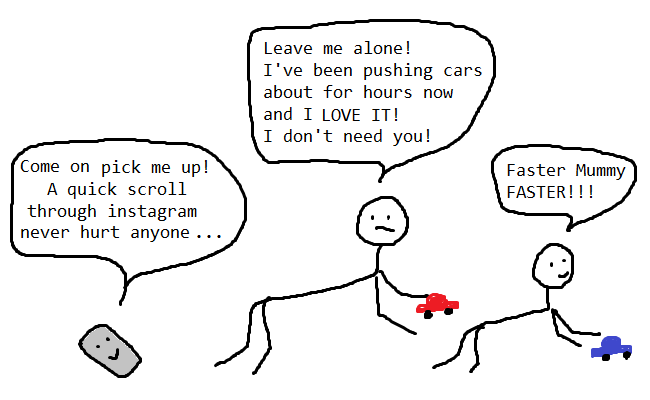 So in conclusion – don’t ignore your kids all the time bla bla bla, take em down the park bla bla bla, look at your phone sometimes because it’s ok to have a life bla bla bla and you’ll probably be just fine.

37 thoughts on “Do we really need to feel bad for looking at our phones?”