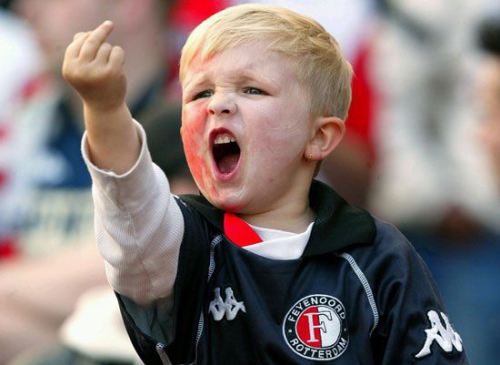 I like a good swear – bloody, bollocking, fuckity fuck. There we go.

Sometimes it’s needed, sometimes it’s necessary. I’m not a huge fan of swearing for swearing sake i.e ‘i’m going to have beans on fucking toast‘. Not really needed or necessary but hey ho, each to their own.

What I’m less keen on is people swearing at, or in front of, their children.

I guess you could say it’s none of my business if people choose to swear in front of ‘their’ kids but when those 3 year old kids start telling my son to ‘fuck off‘ at pre-school it makes me a teeny tiny bit angry.

Now i’m not perfect, i’ve let the odd one slip out from time to time. Little F, or old eagle ears, as we like to call him, has heard and repeated me.

‘No um chugger – i said CHUGGER,  as in Chuggington, i think it might be on cbeebies soon, choo choo – YAY!’

But how often do you have to swear in front of your children, and not correct it, for them to start mouthing off profanities to other children? A fair bit i would have thought.

And Is it really that difficult to at least try and watch what you say? Apparently so.

However, although it leaves a bad taste in my mouth, you can’t tell people how to bring up their kids. I can however put on an extra large pair of judgey pants and give them dirty looks from afar.

Whats worse and what makes me really angry, really fucking angry (I can say that here as it’s in context and i assume you are all adults and not incredibly bored and/or gifted pre-schoolers) is when people swear loudly, pointedly and without reservation in front of other people’s children.

So, i was on a bus the other day and this little kid, about 5, was deemed at fault for making his mum miss their bus stop. He apparently didn’t stand up quickly enough. The barrage of abuse went something like this.

‘For fucks sake Harry, that was our fucking stop and now you’ve made us fucking miss it. Fucking hell. Your so bloody slow, now we’ll gave to walk all the fucking way home.’

I’m not sure what she was expecting here, people to start nodding in agreement or someone to chime in that indeed Harry was a little fucker.

I was sat relatively near the duo and had to fight with myself not to say something. Maybe i should have but i was afraid of the repercussions; not for me, but for my two sons and every other child on the bus. You see I was pretty sure the reception would have been equally foul mouthed and i didn’t want any more impurities to filter into their pretty little ear holes.

In my opinion It’s a parents job to help their children develop a good grasp of language and teach them what is/isn’t appropriate to say. If not for their own sake for the sake of other children around them.

What do you think? Is swearing in front of your kids ever ok?

34 thoughts on “Is swearing in front of your kids ever ok?”